AFRICA TELLING A WORLD features thirty-three prominent African artists south of the Sahara who tell their story through diverse mediums.

Each year, the PAC Milan explores contemporary artists, highlighting one of our seven continents. This year Africa is in the spotlight and thirty-three African artists tell their story of Africa. Through painting, sculpture, installations, and multimedia, each artist tells his or her story. Presenting an exhibit that teaches the viewer about the most diverse continent on earth.

Adelina von Fürstenberg, international curator, and pioneer in contemporary art for her multicultural approach, created an exhibit that as a result, reminds us of the sometimes-harsh contradictions and challenges we see in Africa today. Pieces were procured from both public and private collections and are on exhibit at PAC from June 27 until September 11, 2017.

Ginevra Bria is an Italian art critic and curator who works on the historic and contemporary avant-gardes. She is currently curator of Isisuf – the International Institute of Studies on Futurism and director of the Belloli-Vieira archives.

In addition to a section of design objects, the show is divided into four sections: After Independence, Identity Introspection, Generation Africa, and The Body and the Politics of Distance.

The photography set in the 1950’s to 60’s of Seydou Keïta and Malick Sidibé and J.D.’Okhai Ojeikere bring the viewer back in time to intimate portraits showing daily life and the fashions of the time.

A private album by the photographer J.D. ’Okhai Ojeikere,  Hairstyles 1968–1985, showed to a guest during a friendly visit for tea, became the basis of an entire exhibit, some of which are here on loan for this exhibit.

Touguo’s  Wood Boat explores the issues of the economy and the environment using a Noah’s ark of  bundled bags and cloth sacks sailing on a sea of plastic bottles. Perhaps the artist is telling us that today we give more importance to commerce and consumption rather than the world around us.

The Generation Africa collection bring to surface the new generation of artists that are confident and fully aware of their identity. Artists that have studied abroad and have broken out of stereotypes, fearlessly dealing with issues such as individualism, immigration, violence and gender issues. Artists featured in Generation Africa are Malala Andrialavidrazana (Madagascar), Omar Ba (Senegal), Kudzanai Chiurai (Zimbabwe), Senzeni Marasela (South Africa), and Billie Zangewa (Malawi).

A surrealistic scene perfectly lit and staged. A scene of violence and aggression against women is perhaps full of more truth than we wish to admit. Four women around a dead woman in weak, fearful postures, yet one, looking her aggressor straight in the eye. The men are growling, arrogant, hateful and short of explosion.

The Body and the Politics of Distance

Survivors of domestic violence tell their stories to Goliath, but the words are edited out. The in between pauses and breathes tell us so much more than words would.

The Throne seems to symbolize new pride and renewal after hardship and grief. The large spacious seat is probably sending a message to humanity, discouraging us to sit in the seat of war.

Many thanks to the PAC Milano for inviting LuxAfrique to attend the show.

Interpretations by the author do not intend to represent the ideas or goals of the artists or gallery. 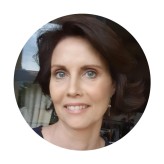 Celia is a freelance lifestyle and travel writer living in Italy. She contributes to both online and offline publications and is editor of Milanostyle.com.