Africa’s CEOs are confident that the outlook for business remains positive notwithstanding the unpredictable economic and socio-political climate. The insight comes from the Big Four heavyweight PwC, that has recently released its report called Africa Business Agenda. The report compiles results from 80 interviews with CEOs across 11 countries in Africa. It also provides an in-depth analysis and insights into how businesses are adopting to meet the challenges of operating in Africa. 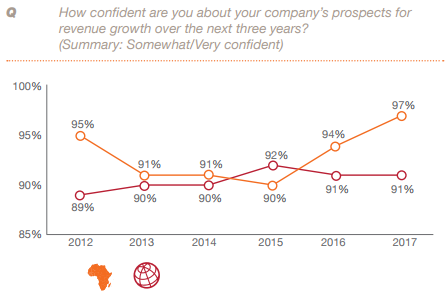 The report suggests that one of the reasons for such optimism is that African CEOs have learned to look for the upside. Leaders on the continent know how seize on opportunities that may arise in the face of uncertainty. In the wake of climate of muted growth, CEOs have also acknowledged that they need to focus on organic growth and cost reductions. However, they also need to prioritise investment in new strategic alliances and joint ventures to expand their markets. Organic growth (80%) and new alliances (69%) are the top activities for driving the corporate growth. 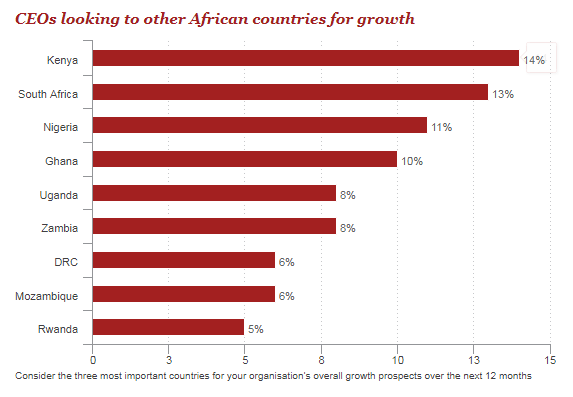 Notwithstanding the current climate and challenges, it is notable that there remains a significant amount of potential to unlock more growth on the continent. African CEOs are looking to international markets for opportunities. They consider the US (31%), China (28%) and the UK (24%) to be the top three countries for growth. Johannesburg (36%), Lagos (16%) and Cape Town (14%) are considered the top three African cities for growth opportunities.

Although the returns for doing business on the continent can be high, so too can the risks. Africa’s CEOs are working in difficult times – finding the right talent for their business, dealing with hurdles that come with working with governments, and managing expansion plans across the continent. In addition, infrastructure remains a challenge as it lags well behind that of the rest of the world.

More than two-thirds of African CEOs (69%) are concerned about inadequate basic infrastructure. They also believe that a stronger focus on expanding power supply is required to solve one of the biggest challenges in the business environment. 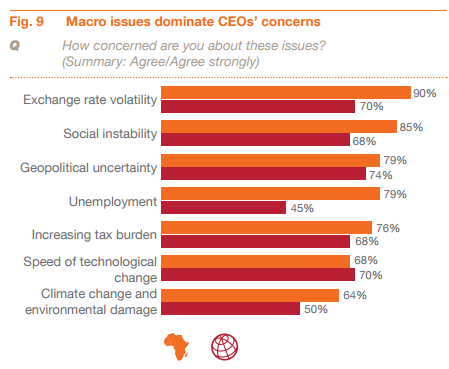 Other risks include exchange rate volatility (90%), social instability (85%), geopolitical instability (74%), unemployment (79%), and climate change (64%). For most of these factors, the level of concern among African CEOs is higher than the global average. In addition, over-regulation features on the list of concerns , with 46% of African CEOs saying they are “extremely concerned”.

Overall, globalisation has benefitted connectivity, trade and mobility. However, just over half of African business leaders say globalisation has done nothing to promote equality, in particular in closing the gap between rich and poor. In fact, this gap may well be widening. A number of CEOs think it is vital to address social challenges. CEOs believe the corporate community can assist in spreading the benefits of globalisation more widely. The majority say the best way is to collaborate, particularly with government. “While Africa’s potential is undoubted, its achievement remains in question. Business, government and civil society will need to work harder to turn potential into tangible gains against the backdrop of a rapidly changing world,” Dion Shango, CEO of PwC South Africa adds.

The forces of globalisation and technology are increasingly transforming the workplace. Over half of African CEOs (53%) are exploring the benefits of humans and machines working together in the workplace. Over a third of African CEOs (36%) are considering the impact of artificial intelligence on future skills needs. In some sectors, automation has already replaced some jobs entirely. However, as CEOs develop their services, they are finding that human interaction in the workplace is still important. Therefore they do place the investment in talent as a top business priority. Just over half of African CEOs (51%) plan to increase their headcount in the next 12 months. Conversely, 23% plan to cut their company’s headcount over the coming year. In addition, more than two-thirds of expected reductions are being attributed to automation and other technologies.

According to the survey results, no less than 80% of African CEOs see the availability of key skills as the biggest threat to growth. They are finding it particularly difficult to source soft skills – adaptability, problem solving, creativity and leadership.

Technology has brought about a number of advancements in efficiency and the ease of doing business in Africa. 91% of African respondents believe technology has changed competition in their industry in the past five years. While the digital era offers a host of opportunities, it also creates significant challenges in the arena of privacy and security. Organisations are holding increasingly large volumes of personal data about their customers, suppliers and employees. According to the survey results, 71% of African CEOs say they are concerned about cyber threats. Furthermore, the vast majority of African CEOs (93%) believe that cyber security breaches affecting personal information or critical systems will negatively impact stakeholder trust levels in their organisations in the next five years. A high 96% of business leaders are also concerned that IT outages and disruptions could impair trust in their respective industries over the next five years.

As disruptions gain more speed, the ability to ensure trust, security and privacy across all interactions will become critical to businesses’ competitiveness. But almost two-thirds of African CEOs (61%) are concerned that they are not prepared to respond to a crisis in their business, should one arise.

“In the face of economic and socio-political uncertainty, we remain confident that the outlook for business in Africa remains positive. But to succeed, businesses need to adapt swiftly to change,” Shango concludes.

Find out more at https://www.pwc.co.za/en/publications/africa-business-agenda.html

Africa and it's growing luxury market